Power Apps Guide
A headline feature of Windows 11 is the ability to run Android apps natively through the "Windows Subsystem for Android". This is an important feature that Microsoft hopes will encourage users to migrate from Windows 10 and older operating systems to Windows 11.
The ability to run Android apps in Windows 11 opens the possibility to run the Android Power Apps player in Windows 11. This would provide a means of being able to more quickly test how an app behaves under Android and to more easily test offline capabilities by using the Windows firewall to block the Android player.
This post describes how to set up the "Windows Subsystem for Android" in Windows 11. This exercise can be very useful, not just for testing Power Apps, but for running other Android apps on a Windows 11 PC. In the second half of this post, we'll examine whether the Android Power Apps player works using this setup.

Overview of steps to install "Windows Subsystem for Android"

Carry out the pre-requisite steps "Windows Subsystem for Android"

The "Windows Subsystem for Android" requires the host computer to have 8GB of RAM, an SSD (solid state drive), and a minimum of an 8th gen i3 CPU. Furthermore, virtualisation must be enabled at the hardware level through the BIOS, and Hyper-V components must be installed in Windows.

To confirm that virtualisation is enabled at the hardware level, a simple way is to open Task Manager and to check the Virtualisation setting. 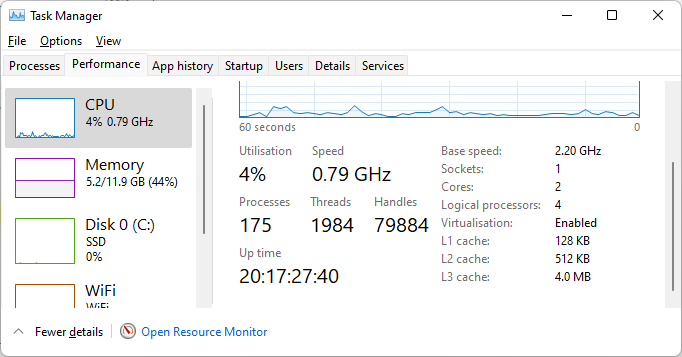 If virtualisation is disabled, we must enable this through the BIOS.
The next step is to enable the following 3 features through "Windows Features"
Enabling these features requires a reboot and once they are enabled, we can carry on. 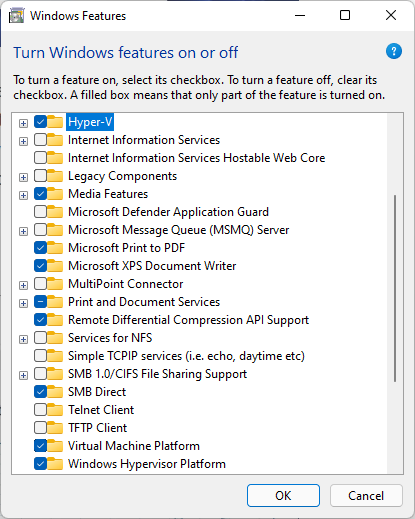 Downloading and installing the Windows Subsystem for Android

If you're based in the US, you can skip this step by installing the "Windows Subsystem for Android" through the official means of installing the Amazon App Store via the Microsoft Store. There are more details here.

For users outside of the US,  we can discover the download links for "Windows Subsystem for Android" by visiting the site below and searching the Product ID 9P3395VX91NR.

For the most popular x64 platform, here are the files to download:

Whilst it's possible to install these files by double-clicking them in Windows Explorer, this doesn't provide useful error messages when errors occur (for example, not installing dependencies in the correct order). Therefore, the best way to install these 4 files is to use Power Shell and to run the "Add-AppxPackage" cmdlet.

Note that in my case, I was unable to install the UWPDesktop APPX file because there were components that were locked by the "Your Phone" app. I was able to detect this issue through the error message from Add-AppxPackage, and I was able to fix this by killing the process through Task Manager.

In preparation for sideloading the Android Power Apps player, the next step is to obtain the APK (Android Package) file for the Power Apps Player. The purpose of APK files is to distribute and install Android apps.

There are 2 ways to obtain an APK file.

The first method is to install the Power Apps player on an Android device officially through the Google Play store. We can then use a backup tool to generate an APK file. There are many backup apps that we can use, one that I use is "Assistant for Android".

A second way to obtain the Power Apps APK package is to use an online web repository, such as  Apkpure.com. As the screenshot below illustrates, we can carry out a search for "Power Apps", and download the current version of the player, as well as previous versions.

The next step is to download ADB (Android Debug Bridge). ADB is a command-line tool that debugs apps, and helps us to access parts of the Android platform that are usually hidden away from an average user.
We can download ADB from the following link.

Once we download this ZIP file, we extract the contents to an accessible location. For this example, I extracted the files to "C:\PowerApps\AndroidTools".

Sideloading the Power Apps APK onto the emulator

The next step is to connect ADB to the "Windows Subsystem for Android". To do this, we need the IP address of the ADB endpoint.

To determine this, open "Windows Subsystem for Android" from the start menu and enable the "Developer mode" option.

The ADB IP address should then appear in the "Developer mode" group, and we can then open a command prompt and make a connection to this IP address by running the following command:
We can then install the Power Apps APK through ADB by running the adb install command:
If all goes well, a success message will appear, and a shortcut for the Power Apps Android Player will appear in the Windows Start Menu – just like any regular Windows app.

The screenshot beneath shows the appearance of the Power Apps Android player shortcut following the ADB installation. 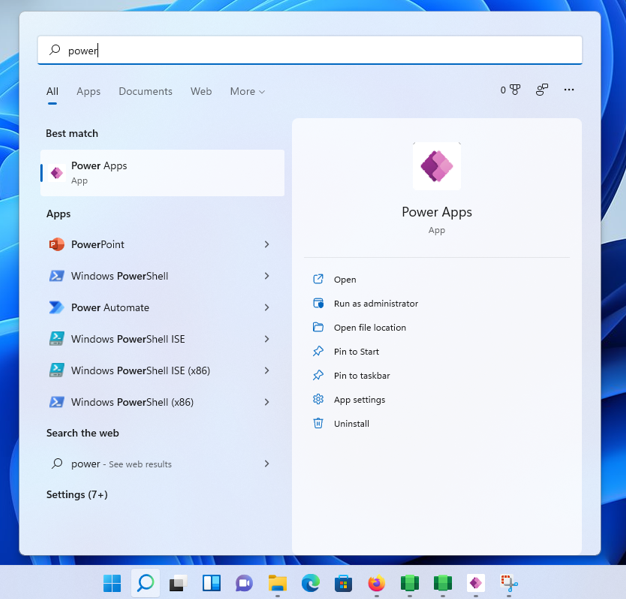 From the Start Menu pane, the Uninstall option removes the Android app from Windows, and the 'App settings' option displays the following 'App info' pane. This view is identical to the app info details that we can access through the settings menu of a physical Android device.

Now for the moment of truth - does the sideloaded Power Apps Android Player work? In the initial test that I carried out, it unfortunately didn't work. The app did not appear after clicking the start menu icon.
Without wanting to give up too soon, I decided to uninstall the v.322022.28 and to install one of the older versions. The great news is that it worked, and I was able to open and run apps as expected, as shown in the screenshot below.

Windows 11 can run Android apps natively through the "Windows Subsystem for Android". Officially, this works only in the US, and supports only Android apps that are deployed through the Amazon App Store.

It's possible to install the "Windows Subsystem for Android" and to sideload Android apps, and this post walked through the process.

The Android player is not officially supported under Windows 11 and I was unable to get the latest version to work. However, I was able to install a working previous version.

In conclusion, whilst it can be a useful exercise to understand how Android apps work in Windows 11, I would not recommend this approach for testing Power Apps. Instead, I would use a physical device or an emulator for mobile test purposes.
Previous
Scams - How spammers are using the Power Platform to send mass email messages!
Next
Visualisation - How to graphically indicate a percentage value
Related posts